Joan knew it must have been a busy week for me because I didn't blog all week. True, it was nuts but manageably so, and the next two and a half weeks will be wild. Not to worry, I can handle it. 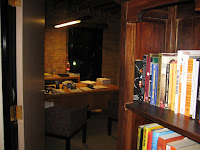 (Right now, as I write this, it's Sunday night. I walked over to the office and am doing a few things to make Monday morning easier, and it's nice and quiet now, no phones ringing, no interruptions.)

I just today finished reading a book about contemporary office life, a first novel by Joshua Ferris titled Then We Came to the End. The New York Times named it one of the ten best books of 2007 (whatever that means), and I also recommend it highly. We, those of us with jobs that is, spend so much of our lives with co-workers, how can they not have an effect on us? And then corporate America, with its economic downturns and heartless layoffs and all that.... well, just give the book a try.

And, as for being too busy to blog, I think maybe I blog more when I'm busy. Gives my mind a ten-minute escape. Some people take a smoke break, I take a blog break.
Posted by Howard at 7:31 PM 1 comment:

overheard at the coffeeshop 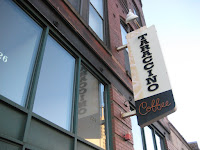 I peer over my glasses to see who is here at the neighborhood coffeeshop this morning... There is the black man who looks like he might be a professor, always here on the weekends with his teenage daughter. He usually is reading a book, while the daughter looks bored to tears, and they don't talk. She keeps looking around, and every few minutes she picks up her cell phone, either desperately hoping for a text message or maybe playing Tetris on the phone. This morning, though, there is that guy sitting with them -- the older white guy with the white beard and wearing a cap that makes him look like a 1917 Bolshevik -- and when he sits with them, the two men never stop talking. I can never hear what they are saying, so I imagine they are discussing the book the Bolshevik might be writing, or maybe they are plotting the Revolution.. No, I don't think that's it -- If it were something that interesting, the daughter wouldn't look like she's ready to blow her brains out.

Then Jim and Ruth, retired friends of ours, stop over at my table, as they always do, to see what book I'm reading. What's refreshing about them is that they have usually at least heard of whatever it is. A couple tables away are the two slightly overweight cops eating their muffins and hoping that people don't stop at their table to tell them about the new graffiti on the building next door, graffiti reports being something they say isn't their job any more. Then next to them is the guy who seems nice but talks to himself. I get the impression he might have fried his mind on something, and he always has the look that he just got out of re-hab.

Students from the U start to drift in with their laptops. I finish my latte and trudge through the snow, Doctor Zhivago-like, down the street to my 9 a.m. haircut appointment and from there to the office. A lovely Saturday morning.
Posted by Howard at 9:44 AM No comments:

The first day of Spring, the 20th of March, is just a date on the calendar in Minnesota, where snow is predicted for tonight (Whoops -- more weather talk, the curse of living here). Another matter, though: 34 years ago today, my first-born son, Jon, came into the world and into my life. He would roll his eyes and groan if I said anything about how proud I am of the man he has become, so I won't. :-)
Posted by Howard at 7:30 PM No comments:

Email ThisBlogThis!Share to TwitterShare to FacebookShare to Pinterest
Labels: Jon

she was almost named Patty

I have a bunch of Irish blood in me, but when I wake up on the 17th of March, why should I think of St. Patrick's Day? It's my sister Nancy's birthday! Being the excellent brother, I gave her a call this morning before work, realizing that this is one of Nancy's "landmark" birthdays (meaning one of those ending in a zero), calling her cell phone instead of the land line, luckily, because it turned out that she wasn't at home in North Carolina. Her husband Dave had surprised her yesterday, driven them a few miles into South Carolina, and they spent the night at a quiet Bed and Breakfast. My brother-in-law the romantic! Who'd a-thunk it?

They're finally starting to say that our economy is in a "recession". I've been dealing with business clients for 30 years, and I can honestly say that I've never seen businesses struggling like they are now. Meanwhile, individuals are dealing with foreclosures, work layoffs, massive debt, and financial fear. None of our leaders or would-be leaders are inspiring confidence. I think it's going to take a lot more than a feel-good tax rebate.
Posted by Howard at 1:54 PM No comments:

Yeah, I'm kidding, I never dropped acid. But I do find it easy to time-warp back to 1968 as if there'd been no in-between times. The past week, I was reading Pictures at a Revolution by Mark Harris, a new book about the dramatic changes in American filmmaking in the 1960s. It makes its points by focusing on the five 1967 Best Picture Oscar nominees from each of their conceptions several years earlier to Oscar night in April 1968. Two of the nominees, Bonnie and Clyde and The Graduate, were cutting-edge masterpieces, nothing like Hollywood had seen before. Two, Guess Who's Coming to Dinner and Doctor Dolittle, were more standard, old-Hollywood stuff. One, the eventual winner In the Heat of the Night, was somewhere in the middle. This book, Pictures at a Revolution, was great, one of those books that I honestly didn't want to see end, a book made only for time-warp freaks and history-of-film buffs. Because it pitted old-Hollywood against new-Hollywood, it was one of the most interesting Oscar races ever, certainly the one that I've ever had the most interest in, and I remember it well -- being so disappointed, in my case, when The Graduate didn't win. Looking back, ah - April 1968 - it seems like a fine time, a "more innocent" time, as they say - hence my time-warp tendencies. Then I realize that the Oscar ceremony that year was just a day after Martin Luther King's funeral and only a couple weeks before I was drafted into the Army for two years, facing an immediate four months of intense jungle training and Vietnam potentially looming over me. Maybe not such an innocent at all. Maybe there are no innocent times.
Posted by Howard at 6:26 PM No comments:

the governor of new york

I know I'm in the minority on this, but I think prostitution should be legal (I also have the radical opinion that most "street drugs" should be legalized, but that's a topic for another day). It isn't. I realize that Elliot Spitzer broke the law by hiring prostitutes and that he knew that he was breaking the law, but what I hate is how in America the inclination is to jump on somebody when they're down, to humiliate and degrade a whole family, especially when it's just for one of these "victim-less crimes". This should be an issue only between the accused and his wife, it's a personal matter. I admire her for sticking by him, even encouraging him to stay in office, and I think it's too bad he resigned as governor today, under incredible pressure even from the hypocrites in his own party. Meanwhile, we have elected officials that are war criminals, responsible for tens of thousands of deaths, and they still hold their positions.
Posted by Howard at 6:21 PM 3 comments:

working my way back to you

When you're working all the time, sometimes you need a few moments away from the work, even if it's just to a different kind of insanity in the outer suburbs. We had a coupon for a free night at Mystic Lake Casino hotel, made the reservation for last night, had a surprisingly beautiful room, gambled a little, ate some good food, slept in a different bed. Woke up, had some breakfast, gambled a tiny bit more, bought some tickets to see Frankie Valli & the Four Seasons (May 17), then left that soft, cozy world to face reality again. It was -5 degrees outside (in March!!). The half-hour drive back into the city, not as nice as the drive out. Back to the office, where the work was impatiently waiting and multiplying. oh well.
Posted by Howard at 5:23 PM No comments:

Finished reading the latest John Grisham book, The Appeal, a couple days ago. He hadn't written a legal novel in several years, so I was kind of excited to get back to one, sort of a 90s nostalgia thing. I was really disappointed. It has a good subject -- how big business is buying the U.S. judicial system -- which I totally agree with him on, but the story is so contrived, so lazy, so lacking in any subtlety, that the message is lost. It should have been a non-fiction book about the real problem.
Posted by Howard at 6:39 PM No comments:

Email ThisBlogThis!Share to TwitterShare to FacebookShare to Pinterest
Labels: books 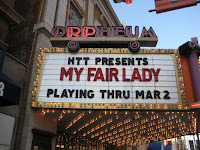 Posted by Howard at 8:22 AM No comments: