what do the normal folk do? 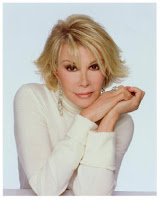 Jerry decided to take a whole day off -- today, a Saturday -- and he somehow talked me into taking the day off too... His reasoning -- "I need to work this Sunday, so you should just work Sunday too instead of today, and we'll spend the day together." This time of year, I'm working all the time, and right now so is he, but I rearranged a client appointment and cancelled a haircut appointment (and I desperately need a haircut) and took the day off.
So now what? My idea of taking a day off would have been to stay at home and "chill", but, no, Jerry said we should do what normal people do on a Saturday. Which is what, I wonder?
We started by going out to breakfast, at Victor's 1959 Cafe ("revolutionary Cuban cooking") in south Minneapolis, then headed to the Mall of America (the opposite of "chilling"), the highlight of which was running into comedienne Joan Rivers, who I actually like very much. She was there for some promotional event for QVC cable shopping network, I think, and also to autograph a couple of her newer books that I had never heard of and had no interest in. If she would have been signing copies of her old bio, Enter Talking, I would have waited in line (It's one of my favorite celebrity autobiographies). She is 75 years old now but has had so much plastic surgery that she looks like a very blond mannequin. Scary! but she's still funny.
The Mall was mobbed today, thousands and thousands of people. We bought some shirts on sale at Macy's and then wanted some coffee, but all of the coffee shops either had long lines (I don't do lines) or had no available seating. So we left the chaos of the Mall behind and headed into Bloomington, where we found a very cool Starbucks in a very seedy strip mall, and had a leisurely cup of coffee while we read the newspaper -- much more my idea of a day off!
Tonight, Tom is here. We're going to watch In Bruges on DVD and then play cards til we head to bed.
Then we'll get up and go to work, which for us this time of year, is normal.
Posted by Howard at 7:12 PM 1 comment:

if i were an Oscar voter

The Academy Awards are Sunday night, and here is where my votes would go:

Best Picture: I liked all the nominated films for Best Picture, but this is the order in which I would rank them: The Curious Case of Benjamin Button, Milk, Slumdog Millionaire, The Reader, and Frost/Nixon. I'm a little surprised that I'm picking Benjamin Button ( a Brad Pitt movie, of all things), especially since Milk and Slumdog Millionaire are so great, but I think it's the one that is best overall. Slumdog Millionaire will, of course, win this category, but I'm thinking that it won't look nearly as good five years from now as it does now, especially with all that "Who Wants to be a Millionaire?" stuff ( a TV show that I hate).

Best Actress: a tough category. Kate Winslet is great in The Reader, and she will win, but how can anybody be better than Meryl Streep in Doubt?

If Slumdog Millionaire wins everything, I'll be disappointed but unsurprised.

And Hugh Jackman is the host on the awards show this year?.. a non-comedian??

Email ThisBlogThis!Share to TwitterShare to FacebookShare to Pinterest
Labels: movies

This morning, I asked Jerry who he would rather spend today, Presidents' Day, with -- me or Barack Obama? -- and was surprised when he answered "Barack Obama." Ouch!

Doesn't matter. We're both working today anyway (and I bet Barack is also).. We did take the morning off to take my sister Joan to the doctor to have her cast removed. She is now once again among the walking! The wheelchair is history.

What is "Presidents' Day" anyway?.. When I was a kid in New Jersey, we had both Lincoln's birthday (Feb 12) and Washington's birthday (Feb 22) as holidays every year, and somehow it all got merged into a Monday holiday called Presidents' Day, which meant that Lincoln and Washington got smushed into bad company like Franklin Pierce and george w. bush. Maybe that's why fewer and fewer companies have this as a paid day off. What's to celebrate??
Posted by Howard at 1:21 PM No comments:

definitions of a miracle

I was reading about the pilot of the "Miracle on the Hudson" plane being interviewed on Larry King. You know the story? The U.S. Air flight that was taking off in New York, hit a bunch of birds, and crashed into the Hudson River? Amazingly, everyone on the flight survived, and the pilot and crew were great in time of crisis.

But I keep thinking about how this event keeps being called the "Miracle on the Hudson". What is a "miracle", anyway? According to Wikopedia, "A miracle is a sensibly perceptible interruption of the laws of nature, such that can only be explained by divine intervention..." So what was the divine intervention in this case? It seems to me that a better divine intervention would be to not have those birds there at all. In other words, maybe the miracle is all the thousands of flights that don't hit birds in the first place. Maybe this wasn't a "miracle" at all, maybe it was more of an "oops".

And who was watching out for the birds? (Apparently they weren't sparrows!)

Continuing with Wikopedia, though, I also see a more watered-down definition: "In casual usage, 'miracle' may also refer to any statistically unlikely but beneficial event", a description which I guess sort of applies when a plane crashes and all the people on board survive -- certainly more of a "miracle" than the 1980 U.S. Olympic hockey team winning the gold medal, for instance. And for the news media to start reporting the news using less dramatic terminology? -- well, I guess that would be a miracle.
Posted by Howard at 9:42 AM No comments:

will work for food

For me, it's easy to lose perspective this time of year... I get kinda weird when I work long hours day after day... A couple nights ago, I was bleary-eyed and goofy when Jerry picked me up at the office... It was late, and I was starving and on the verge of crabbiness (and you've never seen me crabby, I'm sure)... "Where should we go to eat?" Jerry asks, trying to accomodate... I feel the need to drown my sorrows in something greasy, so I say, "I'm really in the mood for Psycho Suzie's!" So he drove me over to Psycho Suzie's, where I ranted at him about my day until the cocktail started taking effect and the sausage-and-mushroom pizza arrived at our table, and suddenly life was good again.

Meanwhile, there are all those people out there suddenly without jobs, and I'm wondering where that will all end... More homeless people?.. Believe me, you don't want to be homeless in Minnesota in winter. Target Corporation and Best Buy are headquartered here in Minneapolis, and even they are laying off significant numbers of corporate staff. So for now, I guess I won't complain about being overworked.
****
Didn't watch the SuperBowl this year (Arizona? Pittsburgh? halftime show?.. who cares?), went to a movie instead (Frost/Nixon). Still need to see a couple more Oscar nominees, The Reader and Benjamin Button, maybe The Wrestler and Doubt if I don't run out of time.
****
Just finished reading a good book, Polanski by Christopher Sandford. Not the best biography I've ever read, but I enjoyed it very much -- Who has had a more dramatic life than Roman Polanski?
****
Am I missing something, or what is the big deal about Michael Phelps smoking some pot? Where's the loyalty, Americans? This guy won eight Olympic gold medals! Let him have some fun!
Posted by Howard at 8:34 AM 1 comment: