My office is moving in a few days, and it's one of those times when there aren't enough hours in the day... The details are overwhelming, on top of the normal work load.... But our new office downtown is really shaping up and will be quite beautiful. That at least makes it somewhat easier to leave my current office, which I love.

Am still feeling good from the vacation I had last week with Jerry, Nancy, and Joan... We all traveled well together, covered 2000 miles over four states, saw magnificent scenery and cities and towns that were new to us. 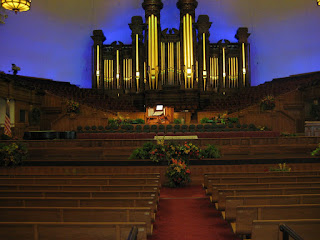 Greetings from Salt Lake City, Utah, which is actually kind of a nice city (for a couple of days, anyway)... We had some preconceived notions about this Mormon-headquartered state that have been de-bunked -- for instance, that because Mormons don't ingest caffeine that we would have problems finding coffee or Pepsi, but there are plenty of Starbucks and other coffee outlets everywhere. We have gotten a good flavor of the city and did some Mormon stuff too -- my favorite part being attending a recital on the beautiful Mormon Tabernacle pipe organ this afternoon (Remember, I'm a pipe organ freak). (click on the photo at right).
***
We're staying at a hotel across the street from the arena where the Utah Jazz NBA team plays (The "Utah Jazz" to me being the funniest name in major league sports, in this unjazziest of states). Am having a good time traveling with Jerry and Nancy and Joan.... Finding some interesting things out about these two sisters of mine -- that Nancy is sort of attracted to guys who drive Harleys (!) and that Joan is very attracted to clean-cut 20-year-old Mormon boys in their white dress shirts (Although I'm not sure she'd like to keep them all that clean-cut)... :-)
***
Heading tomorrow to Yellowstone National Park in Wyoming.... Staying tomorrow night in Jackson Hole...
Posted by Howard at 10:47 PM No comments:

Something happens on Labor Day. It doesn't matter what date it comes on or what the weather is like. For me, it's the end of summer, and that's a bad day.

Jon, my son, says that no, Labor Day isn't the end of summer. Some would say it ends on the 20th (21st?) of September, the first day of autumn. Jon, I think, would say it ends at the first hard frost, whenever that might come, because suddenly Jon's life changes on that day. From early spring to first frost, his life centers around his garden and his yard. I should take some photos and put them here: His garden is absolutely beautiful, down to the most minute detail. How he emotionally handles one day seeing it all dead I don't know. I guess he focuses from then through winter on planning next year's plantings.

Me, I look back and think that this was probably the most beautiful summer I have ever seen, even though it didn't arrive until late June. I never had so many days where people would be commenting on how perfect a day it is. When I look forward, I think what we have to go through before we have summer again (and will it be as half as good a summer next year?): Football, Christmas, snow, basketball, below-zero temps, tax season, hockey, colds and flu, down jackets, baseball spring-training... and then, finally, Jon out planting and hoping there won't be a late-spring snowstorm...

.... and meanwhile, even though Labor Day is several days behind us, the weather is still perfect, and we hold our breath. Now we are leaving town for a week, heading to four western states that I have never set foot in, where in the mountains we will need sweatshirts... and come back to sweatshirt weather in Minnesota, I bet.

the 'best health-care system in the world' fiction

In the middle of this most recent blog silence, we spent four days in New Jersey, mostly to be there to attend a benefit fundraiser for my cousin Bev, who recently was diagnosed with breast cancer and needed financial help. The fundraiser turned out to be quite an amazing event. Bev is the kind of person who has always taken care of everybody, the person everyone always knew they could count on, and all those years of caring and loving came back to her in spades.

The probable reason why Bev needed surgery for her breast cancer instead of a less drastic (and less costly) treatment option is that she for financial reasons has not had health insurance for the past several years, so has had no doctor visits, mammograms, etc., during that time and so there was no early detection of the cancer. She is one of the reasons, for me, why the so-called health care "debate" in this country this summer has been so grating -- the town-hall shouting matches, the lies from the right-wing, the billions of dollars being spent by the big insurance and pharmaceutical corporations to misinform easily fooled people. Real debate has become an impossibility in this country. It's embarrassing -- I hope the rest of the world isn't watching.
Posted by Howard at 10:04 PM No comments: