spectator sports, escapism for the masses.... but oh how that escapism can lead to its own anguish.

take today, for instance. There was Brett Favre breaking the all-time league record for touchdown passes, just a few feet from me. Did he have to break the record here at the Metrodome, couldn't he have done it in Green Bay? Vikings fans are having a stressful season as it is (1-3) with just a one-person offense (running back Adrian Peterson), and then on top of that you lose to the Packers and give up a historical touchdown pass by Favre. And one of the disadvantages of being just 20 miles from Wisconsin -- way too close during football season -- is that there are too many Packer fans in the stands, wearing their stupid cheese-heads. There goes the home-field advantage! so, final score, sad to say -- Packers 23, Vikings 16. Then as Jerry and I were leaving the stadium, we saw a Packer fan and a Vikings fan engaged in the biggest fistfight I've ever seen at a Vikings game (it almost felt like it could have been an Eagles game!).. I bet those two guys will be glad to get back to work tomorrow to escape from all this sports stress.

ah, but then you have your rewards. you win some, you lose some. As soon as i got home from the game, i got on-line right away to find that -- yes! -- the Philadelphia Phillies won their division today and are in the baseball playoffs, first time since 1993..... Go, Phillies! we fans of the Philadelphia sports teams need a champion!

Back to football: my next Vikings home game to go to: October 28th vs. the Philadelphia Eagles [another 1-3 team, i sadly note later].... I love the Vikings, of course, at least in a second-fiddle sort of way, but -- hey! -- for that game, I'll be wearing my Eagles shirt and cap. I'll make sure to avoid that Vikings fistfight guy.
Posted by Howard at 5:38 PM No comments:

thoughts about 'The War'

Anyway, this series seems to be well done, as Ken Burns documentaries are, and i learned from it. Ordinarily, i would find a series about why and whether a war is fought -- and all of the social and political implications -- to be more interesting than how it is fought, battle strategies and all that, but i realize it's all connected. it's all terrible.

and the terror goes on. i'm frustrated by the bush administration's current strategy of trying to pass the why and the whether of this current war over to the generals, criticizing the Democrats and wavering Republicans for "politicizing" the war. Wars are political! The military should not be making decisions whether to continue fighting a war. And the military should be questioned on its strategies. And i'm frustrated with the gutless Democrats for allowing this war to go on and for being so easily subdued by empty rhetoric.

i wish i could ignore politics and all the madness. it's all so draining.
Posted by Howard at 7:02 PM 1 comment:

i was sitting outside the coffee shop this morning reading my book, my reading glasses tipped down my nose. a woman and her teenage daughter walked by me on the sidewalk, and i noticed that the mother was giving me a funny look of recognition when she walked into the coffee shop and then again when she was leaving. i was thinking, do i know her from somewhere? but apparently i didn't. after they went to their car, the daughter came back to where i was sitting and said, "I'm sorry to bother you, but my mother wants me to ask you -- Are you Eric Clapton??" i assured her, in my decidely un-British accent, that i was not. she was disappointed -- she and her mom are both Eric Clapton fans -- and she said, "i bet you hear that all the time." No, it was a first. And, i'm thinking, what the heck does Eric Clapton even look like these days? when i think of Eric Clapton, i think of how he looked in 1969. maybe i shouldn't be feeling good about this.

football season has started, for better or for worse, and we'll see how many hours i waste on it between now and January. Jerry and i have season tickets to the Vikings, as we usually do (don't laugh!), so tomorrow at noon we'll be at the Metrodome watching the Vikes against the Atlanta Falcons, a team that i've despised ever since the NFC championship game in early 1999. the Vikings have a lot of new players this year, so they are sort of an unknown, but even when they are a known they are an unknown. luckily for us, the Falcons are probably awful this year. what could have made tomorrow's game more exciting would have been if Michael Vick, the notorious dog-abuser, were playing quarterback for the Falcons instead of being suspended. i'm sure he would be booed right out of town, if not worse (maybe even enough violence to satisfy a hockey fan!). i bet even his teammates think he's a slimebag. (Our local minor-league baseball team, the St. Paul Saints, had a good promotion giveaway at one of their games last month -- Michael Vick doggie chew toys).

vikings fan or not, though, having grown up in the shadow of Philadelphia, my heart still lies with the Eagles, and i would love to see the Eagles win their first Super Bowl (i'd also love to win the lottery). expectations for the Eagles are generally high this year, which is probably not good because they seem to do better when expectations are not high. let's hope McNabb's body can take all those hits.

my expectations are high for the New England Patriots this year, a team which i am not fond of but which obtained Randy Moss, who i am fond of. Moss in my opinion hasn't had a good quarterback throwing to him since Randall Cunningham and now he'll have Tom Brady, another dude i don't like but who we have to admit is a good quarterback. the question is, does Moss still have what it takes? or, for that matter, does Brady?

enjoy the season! or, better yet, find something more productive to do!
Posted by Howard at 2:10 PM No comments:

many years ago, i was an unwilling draftee stationed at an Army base in Germany for a year and a half, not paying much attention to Germany itself -- mostly glad that i wasn't in Vietnam instead but still resentful when they made us sleep in tents in the snow and stuff like that. meanwhile, there was Germany all around me. there i was with my brain full of anti-Army thoughts when i could have been learning German from Germans. i've been back to Germany several times in the last seven years. i have friends there who i rely on to speak English to me while i sit there dumb as a post about their language. SO -- i've made up my mind to be able to be able to speak some at least minimal amount of German the next time i go. tonight was my first class in "practical German", which made me realize how difficult this could be. ouch. but there i am, back in school. i hope i make you all proud.

and, sadly, we're now past Labor Day. no more summer for a while. at least we won't be hearing about Jerry Lewis for another year (thank God!). Joan and i went out for coffee Labor Day afternoon and mostly vented about politics -- about Hillary's poll ratings which are making Joan nervous (she loves Hillary), about Barack's weak handshake, about Larry Craig being such a liar, the usual. people keep asking me my opinion of the Larry Craig bust. i think i've decided he shouldn't resign his Senate seat after all, as much as i would like to see him out of the Senate. he is obviously lying through his teeth -- it was a classic cruising attempt, but i just don't see what law he broke. it was a case of intimidation through humiliation. wow. the republicans sure were quick to abandon him, though, weren't they? where is the loyalty? they were ready to flush him right down the toilet. okay, bad metaphor.
Posted by Howard at 9:25 PM No comments:

back to the bridge 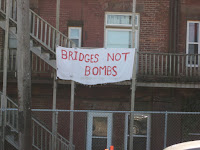 yesterday, September 1st, a month after the collapse of the I-35W bridge here in Minneapolis, i went over to the site again, about eight blocks from our house, because the parallel bridge is now finally open again to traffic and pedestrians can now get a look down at the ruins in the river. it turned out that many people were there with me, taking photos, being somber -- people maybe on their way to the State Fair or returning students to the University of Minnesota, which is literally next door to the collapsed bridge.

it has been interesting to see how people locally have responded to the tragedy. numerous neighborhood meetings have been held to discuss how the bridge should be re-built or if it should even be re-built. the anti-tax people are out in force (of course), the environmentalists and mass-transit proponents have input, the neighborhoods bearing the brunt of the re-routed traffic patterns are concerned about how long this will all take. it sounds like the government, despite all the local feedback, has the new bridge already planned. i hope it's done right, and i hope something is being done about the thousands of other bridges in the U.S. that were getting the same negative (or worse) engineering ratings as this former bridge.
Posted by Howard at 9:27 AM No comments: