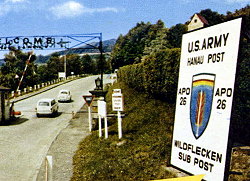 It was my first Christmas away from home, away from family and friends.  I was stationed at a fairly remote Army post about nine kilometers from what was then the barbed-wired East German border.  The post was on a mountain overlooking snowy valleys and was a training base originally in Hitler's era and then after the war for American and West German troops.

This was before I had been appointed company clerk so I was just an infantry grunt, which meant that I was still occasionally subject to being on KP ("Kitchen Patrol").  It was my misfortune to be on KP all day on that particular Christmas in 1968.  Talk about adding insult to injury -- peeling potatoes and washing dishes instead of having a day off!  It was a rude awakening after always having had wonderful Christmases at home with my family (My mom, I think, was the best, most efficient Christmas shopper of all time).

Fast-forward to Christmas Day 2011, when I still might be peeling potatoes and washing dishes but doing it for family instead of for sad draftees.  Jerry and I will be hosting quite a crowd this year:  My sister Joan and my two sons, Jon and Tom; my sister Mary and my niece Becky, visiting us from New Jersey; my nephew James and his friend Tim; and my niece Ruthie and her family.  I hope they know how much I appreciate having Christmas with them.
Posted by Howard at 10:17 AM

Do you still have this photo of Wildflecken U.S. Army Base post? I am a television producer who needs a shot of said base for a TV project I am producing. This is a real inquiry and hopefully you get this response as this seems to be the only way to contact you. I hope you will reply back to me. Thanks so much.

I was station in Wildflecken , Plese contact me I have an incredible history to tell you about that place.