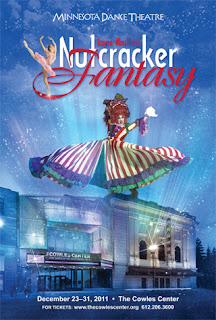 My friend and co-worker Mary O. hates The Nutcracker ballet, but that's only because she worked for a dance company once and while working there had to listen to the score for six months straight.  Now, when she has to call the IRS and gets put on hold and has to listen to "The Waltz of the Flowers" hold-music over and over again for a half hour straight, she goes nuts.

Me, I haven't had such an experience, so I still love Tschaivosky music and The Nutcracker.  Whether it is serious ballet is a whole 'nother discussion.

The Minnesota Dance Theater every year does a terrific Nutcracker, and it's one of my guilty pleasures, so we are taking Mary (my sister, that is -- not Mary O., who would probably have a mental breakdown!), Becky, and Tom to this afternoon's performance.  This year the show is being held at the newly-restored Cowles Center, the former Shubert Theater, which just opened this fall for dance only.  We attended the theater's grand opening but this will be the first actual program we'll be seeing there.  The board of the Cowles Center is hoping that this venue will do locally for dance what the Guthrie has done for theater.
*****
Added later:  Sometime after I wrote the above, I read my horoscope for today:  "Taking in manmade beauty will be one of the most invigorating things you could do today.  Art stimulates your mind and life in ways you won't be able to explain.  It's one of the wonderful excitements of living."
Posted by Howard at 12:40 PM

wonder how that horoscope applies to my day since we have the same one.

In your case I think it's referring to emails from me.

LOL Like you attaching a donut in an email and sending it to me to eat. Very mind stimulating thought there.