Today is one of those quirks of the Gregorian calendar, the 29th of February, and I want to wish all of you with February 29 birthdays a happy birthday, and I guess I won't have to do that again for another four years. ... For the rest of us, let's enjoy our "extra" day.

More worthless knowledge: I of course had to look up and find what "famous" people had a February 29 birthdate and only came up with two people whose names I even recognized, now both dead -- bandleader Jimmy Dorsey and singer/TV star Dinah Shore.
Posted by Howard at 12:32 PM 2 comments:

Well, we saw the last two Best Picture nominees, and I have to say I've never had this much trouble deciding on a favorite. These last two, Atonement and There Will Be Blood, both of which I had low expectations for, were very good movies, so I'm thinking that any of the five nominees could win Best Picture and I'd be okay with it. I usually have somebody to at least root against. OK, let's see. Maybe I'll pick Juno, which I enjoyed the most and would see again, as my favorite, even though it's the kind of small movie that is generally just happy to be nominated. Then there is Atonement, which to me was way better than the Ian McEwan novel (and when have I ever preferred a movie version to the book?). And of course I like the Coen brothers. And George Clooney. :-(

My other (selected) picks: Best Actor: Daniel Day-Lewis for There Will Be Blood; Best Actress: Julie Christie for Away From Her (I love Julie Christie); Directing: the Coen Brothers for No Country for Old Men (they should have won for Fargo); Best Supporting Actor: Tom Wilkinson for Michael Clayton; Best Supporting Actress: Tilda Swinton for Michael Clayton; Best Original Screenplay: Diablo Cody for Juno (she wrote it here in the Twin Cities at coffee shops); Best Cinematography: Atonement.

Anyway, I'm glad that self-imposed pressure is off for a while. No more movies for a while. But I might be seeing three plays next week.
Posted by Howard at 5:54 PM No comments:

a Wild night with Tom 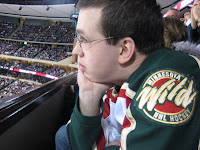 Tom and I had a great evening tonight at the Minnesota Wild game... The Wild beat the Nashville Predators, 5-4, with 4 seconds left in overtime. Exciting finish! (How the heck did Nashville ever get a hockey team, anyway?)... Tom has become an avid hockey fan... but, after all, he has lived his whole life in Minnesota ("The State of Hockey").
*****
Check out this video -- the Wild score another goal:
Posted by Howard at 11:08 PM No comments:

For the past week, I've been on a sort of half-assed diet, which might help explain why my blogsite is suddenly more active (typing instead of eating potato chips) and which is another reason why I'm not reporting what I had for lunch. But then yesterday a friend showed up with a cupcake for me. Immediately, I am thinking, if I'm going to ingest empty calories, I'd rather have a Pepsi, but what was I going to do -- throw it in the dumpster? And my friend said she had spent a long time in line at the cupcake shop because it was Valentine's Day and everybody was there buying cupcakes for their possibly-dieting lovers. So with guilt whichever way I went, I sat down with this unbelievably killer cupcake. I mean, it was chocolate with frosting and then six additional swirls on icing on top that looked to be in the shape white Hershey kisses. It was the most sinful cupcake I've ever eaten. I spent the rest of the day making up for it.

Meanwhile, my sister Joan, if she read my blog on any sort of regular basis, would be yelling at me right now, "Why in the world are you on a diet??", obviously worrying that I might be turning into the Karen Carpenter of brothers. Hey, I'm just trying to avoid some winter/tax-season fat. We might be going back to Hawaii in April, you know.

Off the subject: Another blog content thought. Have you ever, when you're looking at my blog or somebody else's Blogger blog, clicked on that "Next Blog" button on the bar at the top of the site? There is some really weird stuff out there! I am so normal.
Posted by Howard at 11:23 AM No comments:

no movies for old men

In our annual quest to see all five Oscar Best Picture nominees, we went to see Michael Clayton the other night and No Country for Old Men last evening. They were both pretty good (as all Best Picture nominees should be), but is it me or are movies getting harder to watch? My mind might be going, but it seems like so many movies are not so easy to follow. Who are the good guys, who are the bad guys, what the heck is going on? No Country for Old Men is also super-violent, in a Coen Brothers sort of way, but after you see a few people get shot in the throat, you learn when to look away from the screen. Neither of these are movies to relax to.

I would write Jerry a special Happy Valentine's Day greeting, but he's another person who never reads my blog. Really! It's like typing into dead air!

My sister Nancy in North Carolina, in her emails, is always asking me if i've checked her daughter Michelle's blog for this news or her daughter-in-law Cris's blog for that news or this video, and I always say yes because I like both of their blog sites. But then yesterday I asked Nancy if she ever read my blog. Her brutal response: I've read your blog a few times. I usually forget, but it's not near as interesting as reading about my grandkids.

A Later Note: Nancy wrote back and said she had caught up on my blog, but she seems to think that it is too political, which she finds dull (agreeing with Tom). So I was amused when I checked Michelle's blog later in the day and found on this very day Michelle's blog had gone at least momentarily political -- Michelle has endorsed Barack Obama for President.
Posted by Howard at 9:18 AM 4 comments:

OK, I hate to be back to this, but I went to my caucus the other night, and it's still on my mind, and I need to think about other stuff. Isn't this whole Presidential race (which started way too early, as everyone knows) getting eerily similar to American Idol? I mean, think about it. The only thing missing from those endless debates was Paula Abdul as moderator. It's a popularity contest-- it's not about issues, ideas. Who is electable? Someone we like. Should we add a talent contest and swim-suit competition?

Hillary, Barack -- I'll vote for either of course, but Barack's "rock star" status (which doesn't last long in this country) makes me nervous. McCain is scary, but it freaks me out that the media love him, and the media shape the election. Shake me, wake me when it's over.

and my next post will not be about either politics or football. or the weather. or what i had for lunch.
Posted by Howard at 8:06 PM No comments:

OK, I take back everything I said... It was a great game, and I'm glad we didn't go bowling! The Giants 17, the less-than-perfect Patriots 14; Eli Manning looking super and Tom Brady probably feeling really beat-up this morning.... and no more football blogs for 6 months (maybe?) :-)
Posted by Howard at 9:04 AM 2 comments:

Email ThisBlogThis!Share to TwitterShare to FacebookShare to Pinterest
Labels: football

You know I like football, the NFL especially, and I like the playoffs and all that. The SuperBowl, though, has always been sort of annoying for me, unless the Eagles or the Vikings are in it, which of course is hardly ever. The game is nothing compared to all the corporate hoopla and the hours of commercials. Everybody has parties to "watch" the game and get drunk. It's usually a good time to go to the movies or go bowling, since everybody else is at home watching the SuperBowl.

We're invited to friends' house to watch the game this year, so we'll socialize while the game is off in the corner on the hopefully-muted TV. It's hard to get too excited with the New England Patriots and the New York Giants going for the championship anyway. Remember I predicted in my September 8th blog that the Patriots were going to have a phenomenal year? But who wants to see them have a perfect season? Hardly anybody. If the Patriots win, I wouldn't mind seeing Randy Moss finally get a Super Bowl ring, but I would mind seeing Tom Brady getting another one, so I guess that means I need to be rooting for the Giants, which is not easy for an Eagles fan. Would be fun to see "little Manning" win the big one, I guess, after all the abuse he takes from the New York fans.

And, if you watch, try to avoid the halftime show. This year, it's Tom Petty & the Heartbreakers... (are there still Heartbreakers or is it just Tom Petty?)... The way they do the SuperBowl halftime shows is just plain awful. They will have hundreds of people brought in from who-knows-where to jump around in phony hysteria around the stage while Tom Petty plays a couple of his greatest hits (did Tom Petty have greatest hits?). Then they'll truck Tom and his fake fans off the field, the teams will come back, one will win, one will lose, followed by idiotic locker-room interviews and a phone call from bush (unless he is choking on pretzels).... and football is suddenly gone from our lives for the next few months.

whew. it's no wonder everybody gets drunk.
Posted by Howard at 2:31 PM No comments: