At one time, Jerry and I had considered having a party tonight... Not a New Year's Eve party. A 10-year anniversary party.

After all, neither one of us has ever liked New Year's Eve (The end of a year to me always seems sad). That's why each of us was sitting at home in front of our respective computers ten years ago tonight instead of at a party or a bar. And that's where we met. In an AOL chat room.

We didn't stay at our computers that night, though. He drove over to downtown St. Paul, where I was living, and we went to Over the Rainbow, a bar now long defunct, and joined the New Year's Eve party there.

And the rest is history. We are one of the internet success stories.

As it turns out, it's a good thing we didn't plan that anniversary party. For one thing, we're both too worn out. And tonight we'll help care for Joan, who is having her ankle surgery today. And no New Year's Eve party either. We still don't like them.. well, except for maybe that one.

My sister Joan, an all-around cool person with just the right touch of eccentricity, was leaving work to catch the bus home.. The streets and sidewalks were wet, deceptively so. You wouldn't have realized there was ice. It just looked wet.

I was just leaving the gym, and Jerry came rushing in to find me. He had just gotten the call. Joan had just fallen and broken her ankle. An ambulance had taken her to the hospital.

So we rushed to the Emergency Room and sat with Joan while she endured xrays and doctors and nurses and being (almost) knocked out while they reset her ankle. She was in remarkably good spirits, which apparently says something good about the drugs they had her on.

Now she is confined to her apartment for a while, surgery lined up for Wednesday (New Year's Eve day -- good riddance, 2008!).... We bring her Big Macs or whatever else she requests. Our sister Mary arrives tomorrow from New Jersey for a few days to help out. And Joan's cat Alex is also looking after her (Cats sometimes when sense something is wrong?).

The doctors say she may be out of work for as long as two months. Life changes in a split second. Hang in there, Joan!
Posted by Howard at 4:10 PM 1 comment:

a brown christmas wouldn't be so bad...

I'm so bad at this... December is too busy, work-wise and social-calendar-wise, and suddenly it's here.

The next days for us: tonight I need to wrap presents. Tomorrow a.m., work. Then, our next-door neighbor Dee wants us to stop over in the afternoon for a glass of wine. We will then spend the evening, Christmas Eve, with our friends Diane and Tony at their house, eating and drinking and playing games. Christmas Day, my sons Jon and Tom and my sister Joan will be coming over for the day, and we will open presents while Phil Spector's Christmas Album is on the stereo. Hey, you have your traditions, we have ours.. :-)

And I'm happy we're not traveling this Christmas... It's been snowing every other day for the past week or more, with dangerous windchills on most of the in-between days. There have been hundreds of weather-related delays at the Minneapolis airport all week, and the roads are treacherous. We'll enjoy the long weekend cozy at home and will occasionally be looking out our windows at lots of white. Friday through Sunday -- maybe sleep late?

MERRY CHRISTMAS!!!
Posted by Howard at 2:37 PM No comments:

down on main street 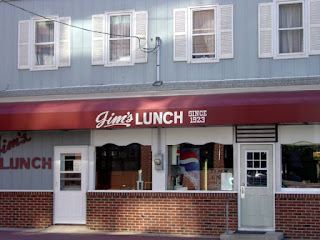 Spent a long weekend in my hometown, Millville, NJ, heading back to zero degree temps in Minnesota tomorrow.
*
Ate breakfast three of my four days here at Jim's Lunch, a great greasy spoon cafe in downtown Millville, at High and Main. It's very Millville. Funny thing, though: it's always very busy when it's open but is closed during the months June through October, the months when I'm most likely to visit home. So this time, during a rare December visit, I'm getting a Jim's Lunch overdose.
*
Visited siblings, cousins, the Jersey sights and foods while here... I need this now and then.... Gotta remember who I am sometimes. Work has been hard lately. Easy to lose perspective.
*****
Reading a good book, which my brother Davy and my sister Joan both recommended to me because they knew I'd like it: Main Street by Sinclair Lewis. Originally published in 1920, it's amazing how current it feels.
Posted by Howard at 9:45 PM 3 comments:

A cold snowy Sunday today. After bumming around one of the used-book stores, late morning/early afternoon, I ducked into the Espresso Royale coffeeshop for some hot coffee and cozy reading time. This coffeeshop is in the funky Dinkytown neighborhood of Minneapolis, adjoining the University of Minnesota, a few blocks from our house. Lots of people are there, probably all U of M students and nobody over the age of 25 except for this old guy in the corner reading his book (that's me). Elvis music is playing the whole time I am there (and I am probably the only person there who knows the songs).

Most of the guys, drinking their coffee and thumbing through textbooks or working their laptops, are still wearing their stocking caps, pulled down over their ears, each cap without exception ugly shades of gray and brown. For me (the old guy), one of the mysteries of current twenty-something guys is why the fascination with really ugly stocking caps? I mean, we were indoors, and these guys wear them all summer too, not just on cold snowy days, so it's not about practicality. It's meant to be a fashion statement, or an anti-fashion statement, isn't it?

... and, if you're gonna wear them, why not at least have some interesting colors to offset the drab winter landscape?...

"Back in my day", the anti-fashion statement was hair down to our butts. Now the hair gets covered up. Or, I don't know, maybe it's just a Minnesota thing.

The coffee was good.
Posted by Howard at 4:00 PM 3 comments:

A few days ago, Jerry's business partner Clark said he'd like to play some racquetball with him... Now Jerry has never played racquetball in his life, and with his back and neck problems, a game of racquetball would put him in traction for a week at least... So I said, tell Clark I'll play some racquetball with him... That offer threw my sister Joan into a tailspin... "You're not going to play racquetball!", meaning, I guess, that she thinks some intense exercise would give me a coronary. Hey, I used to play tons of racquetball, who cares if it was 20-some years ago?!.. I still have my racquetball trophies, who cares that they're dusty and falling apart?! so we'll see if Clark, 20+ years younger than myself, gets desperate for a game and if I survive it.

So to my sister, I guess my involvement in sports can only be as a spectator. I was thinking about that night before last at the Vikings-Bears game. There was actually a lot of exercise involved, lots of jumping up and down and high-fiving people around us... What a great game... Vikings 31, Bears 14. What made it even sweeter was that we had a lot of glum Bears fans sitting not far away (Have you ever noticed how Chicago Bears fans never have necks?). Plus there was a dopey looking guy sitting behind us wearing a "Palin 2012" shirt. It doesn't take a lot of brainpower to be a spectator, obviously.

Anyway, I had to hurry and blog something about the Vikings because at least briefly they are in first place in their division (even though they are only 7-5). A typical Vikings reaction to winning a big game like the Chicago game would be for them to lose next week to the lowly Detroit Lions (The Lions are 0-12).

Other local sports teams at the moment: NHL Hockey: the Wild are 14-8-1. Typical Wild season. NBA Basketball: the Timberwolves are 4-12. Not unusual for the Wolves. Guess we're going to go for the draft pick again.