No, this isn't about John McCain....
*****
We live in a townhouse, our next door neighbor is an older lady named Dee (She used to hate us, now we're her best friends, but that's a whole different story)...

Two weeks ago, we had a day where something weird was happening... My garage-door opener stopped working... I figured it must need a new battery, but a new battery didn't help. Later that same day Jerry's garage-door opener stopped working, and his opener is part of his car, so there is no battery to run down. Then we realized, amazed, that when we pushed the button to open our garage, our neighbor Dee's garage door was going up and down instead of ours. How could this be? These things are programmed! And then the next day, everything was back to normal and our openers were working again, even though we hadn't done anything to fix the situation (Whatever the fix is!).

Jerry and Dee put their heads together on this and came up with the conclusion: we have a ghost. Jerry had already been convinced that in July he brought a ghost home from Denver with him, which has been giving him backaches during the night (Jerry's friend Sarah in Denver theoretically had a ghost in her house and night-time backaches, so it maybe got on the plane to Minneapolis with Jerry[??]). Dee, on the other hand, has been certain that she's been haunted by her late husband (Who was also good at tormenting her while he was alive). Plus, they've decided that there is a third possible ghost -- the guy who used to live where we live and apparently died in our house and who once had fixed Dee's garage-door opener.

Meanwhile, I, being the rational one, just sit there and listen as they talk, while I sip my drink.

But then it happened again three days ago. A whole day of our garage-door openers opening her garage but not ours. Then back to normal the next day!

No, we're not in Boston, we're back home in Minneapolis... But we were in Boston yesterday, after having spent a couple of nights on the coast of Maine, with some time to kill before our flight at 6 P.M...

I hadn't ever been to Boston, so it was interesting to drive around and sort of get the feel of the city while trying at the same time to avoid traffic congestion. We only got out of the car once, in Cambridge, and strolled around Harvard University and Harvard Square a little. This would be a fun, but very expensive, area to live... I would think, though, that living among these fast-moving college students, you would always feel under-educated (Sarah Palin, stay away!)...

We are done traveling for a while, we need to make some money now instead of just spending it.

What a financial week it's been for the world, though! I'm shocked -- shocked! -- to find out that we're a Socialist country after all -- a $700 billion dollar (at least) bailout for the financial industry! Funny how there is always borrowable money for endless wars and aid to corporate America... Now can we please get some national health insurance?? Comparatively, it's just a drop in the bucket!
Posted by Howard at 5:29 PM 3 comments: 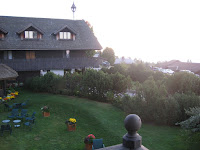 a few of my favorite things....

The past two days, we've been staying at the Trapp Family Lodge, located on a mountaintop overlooking spectacular views in Stowe, Vermont... I could stay here for a long time, but Jerry could only get us great rates for two nights, so today we leave for Maine.

This lodge was founded by the VonTrapp family, which was, as you probably know, the family that The Sound of Music is based on, so there is Sound of Music and Trapp Family and Austrian decor and memorabilia throughout the lodge. Maria VonTrapp, along with her husband Georg and various family members, are buried just to the left of the lodge.

It's early morning, and I'm sitting in the lounge having coffee and listening to a group of senior-citizen bus-tour people getting their instructions for the day.... I should go back to the room and get the maps out...

It's always sad leaving Vermont, perhaps the most charming of the states (and you know I'm a sucker for charm). Would love to come here sometime during ski season. Not to ski, of course. Just to hang out in the lodge by the fireplace.
Posted by Howard at 6:26 AM 2 comments:

Three weeks ago, we were in Alaska, the largest of the 50 states. Now we are in Rhode Island, the smallest.

Trivia question for you: How many Rhode Islands would fit in an area the size of Alaska? The answer is at the bottom of this blog post.

To be specific, we've been in Newport, Rhode Island since yesterday, staying at an old mansion bed-and-breakfast, which is very nice except that we are way up in the attic -- the old servants' quarters, I believe -- very appropriate for us except that our knees are not as strong as they once were. We're on our six-day road trip through New England, following a couple days in New Jersey for my cousin Darlene's wedding. Newport is great. Seaside town, lots of enormous late 19th-century mansions to tour. Today we also drove into Massachusetts and along part of Cape Cod. Tomorrow we head north for Vermont, definitely one of my favorite states.

And how about that Darlene?! Married for the first time at age 62! Cheers!

Here's some news for you: Jerry was quoted in the Wall Street Journal today in an article about the new interstate bridge in Minneapolis, the bridge that replaces the one that collapsed last year. Today's edition, page 2A.

Answer to the trivia question: 423 Rhode Islands would fit into Alaska. Which state would I rather re-visit?.. Well, the scenery in Alaska is beautiful, but once is enough. Rhode Island for sure.
Posted by Howard at 8:22 PM 2 comments:

Now that the tear gas and the other nasty smells of having the Republican Convention in our Cities have mostly blown away and the SWAT storm-troopers have moved on to wherever it is they normally hang out, it's time to change the subject... Besides, if i think about Sarah Palin for even one more minute, I might barf.
*****
My brother Ronnie, who lives in South Jersey, called me a couple weeks ago to tell me something funny. He had just read the Sports Illustrated picks for the top NFL football teams this year, and they were picking our team, the Philadelphia Eagles, to meet my adopted team, the Minnesota Vikings, in the NFC Championship Game, which the Eagles would win, but then the Eagles would lose to New England in the Super Bowl.

We laughed for several minutes. I don't think it occurred to many people in either the Philly area or in Minnesota that these teams have anything special this year. Besides that, everyone knows that both of teams do better when nobody is predicting that they could win. It's a jinx! Having Sports Illustrated pick them probably means that neither team will even make the playoffs!

Week One: The Eagles are off to a good start, beating St. Louis 38-3. The Vikings are off to a typical start, losing to Favre-less Green Bay. And the Patriots are now Brady-less for the season, which probably blows Sports Illustrated's AFC pick too.
*****
Speaking of New England, Jerry and I leave later this week for a few days in New England, after a brief stop in New Jersey for my cousin Darlene's wedding.
Posted by Howard at 9:58 PM No comments:

The Republican Convention is, predictably, dull as dirt, but some of the side shows are kind of fun.

The show that the cops are putting on in downtown St. Paul, for instance. It is like an armed fortress down there -- hundreds of them in full riot gear. They have come in from all over the state and outside the state. Last evening, we tried to pick up Joan (who lives in downtown St. Paul, a few blocks from the Xcel Center) for dinner, and it's not easy with all the detours and barricades and fences and cops itching to use their tear gas. Luckily, we were driving Jerry's BMW, and what cop in his right mind would attack a BMW??

Monday, we marched with the anti-war protestors in St. Paul, and it was great of course (They say 10,000 people marched, I say it was more than that). There were a few anarchists also, mingling through the crowds, obvious in their masks and black clothes, ready to make trouble and ready to get arrested, which they did. I went to their website before the march to see what their plan was and was amazed at how well-organized these anarchists are, which to me seems to be the opposite of anarchy, but oh well... There were numerous and diverse groups that were part of that march. We walked with the Veterans for Peace, which included the Iraq Veterans Against the War.

Joan calls me now and then to update me on the happenings on the streets. Convention ends tomorrow, and downtown St. Paul will be a ghost town once again.
*****
My thoughts on Sarah Palin's pregnant daughter and the upcoming shotgun wedding: Whatever happened to "abstinence only", right-wingers?.. Maybe these kids needed some sex-education classes or condoms??... :-)
Posted by Howard at 1:50 PM 5 comments: