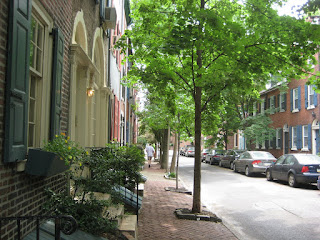 It's a beautiful Memorial Day evening back here in Minneapolis. I'm sitting here drinking a "throwback" Pepsi, trying to get myself ready to be "thrown back" into the office routine tomorrow after a great vacation at the Jersey Shore and in Philly.
*****
(Have you tried the throwback Pepsis yet? They are, apparently, a temporary nostalgia gimmick -- made with natural sugar like Pepsi used to be instead of with corn syrup. I admit that I like them a lot, and, let's face it, Pepsi is one of the great pleasures in life. Can't have it too much, but when we do, let's have real sugar!)
*****
We spent the last 24 hours of our trip in center-city Philly, which I hadn't visited in a number of years -- we usually just see the airport area. We stayed in a great little "boutique" hotel at 12th & Spruce Street, the Alexander Inn, which is located in a wonderful area, probably the best and most fun area, of the city. For me, growing up in South Jersey, Philly was always the nearest big city -- fun to have nearby but at the same time intimidating and kinda scary. Walking around the city this time, I realized how eerily at-home I felt. Made me wonder if maybe I should have spent most of my life in Philadelphia.
Posted by Howard at 8:56 PM 2 comments:

If you watch this video, sorry about the wind "sound effects"... (I hate wind!).

Posted by Howard at 6:06 AM No comments: 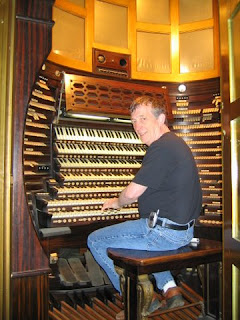 Our rental car is a Toyota Prius, but we're not straying far from the condo and in a small state like New Jersey, "fuel efficiency" goes a long ways, believe me. The condo we're renting: location is perfect; it has way more space than we need; the decor is way over the top, kinda feels like it might have been decorated by a 70-year-old drag queen. It's great! The week is going fast.
We did drive the twenty miles north to Atlantic City a couple times, where we both came out ahead, gambling-wise. We also took a three-hour tour of Atlantic City Convention Hall, the tour mainly being centered around the hall's historic pipe organ, which happens to be the largest pipe organ in the world. It takes that long to tour because the pipes for the organ are placed literally throughout the building (The largest pipe is 64 feet long). I happen to love pipe organs, and if I ever start going back to church again one day, a primary reason will be that I miss hearing (and occasionally playing) a pipe organ (Of course, these days that awful contemporary music, with guitars and drums and garage-band-reject singers, has taken over the music programs at a lot of churches, but that's a topic for another blog).
Back to the Convention Hall pipe organ. I played it once (briefly!) in 1969, which apparently was one of its last years of being fully operational. At present, the organ is being totally restored -- finally -- and I hope to get to hear it again sometime. The highlight of this tour was being able to sit at it again and at least pretend to play.
Posted by Howard at 8:12 PM 1 comment:

the gadgets in my backpack

Traveling used to be so much easier, and I'm not talking about what a pain security is or how awful the airlines are. I'm talking about all the stuff you gotta bring with you these days. There's the laptop and the cords; the digital camera and the cord and the charger; the cell phone and the charger; the iPod and the cords. I mean, I forget one of these items and I'm screwed. I get so obsessed with remembering all this junk that I'll probably forget something essential (?) like underwear! And how many of those items will I accidentally forget and leave in New Jersey??

Anyway, here's the plan: tonight we arrive in Philadelphia, stay overnight in NJ with my sister Mary and brother-in-law John; the next seven nights after that we'll be staying in a condo at 14th & the Boardwalk in Ocean City, as well as visiting relatives in Millville and vicinity; then one night in center-city Philly at the Alexander Inn; home the next day.

I'll blog from Ocean City. Unless I forget my laptop.
Posted by Howard at 1:32 PM No comments:

brother in a strange land

My friend Barb, the leader of my book group (that I am usually AWOL from), was surprised several months ago when I mentioned that I had a brother who lived in Shanghai. Barb, one of the select few people in the world who read my blog, said she only knew about my sister Joan, who gets a frequent mention here in these meandering lines, so Barb assumed she was my only sibling. Actually, I have five siblings, and what's amazing is how well we get along and how much we still like each other and keep in touch with each other. Joan just happens to be the only one who lives nearby.

It's my brother Davy who mostly lives in Shanghai. He teaches English there, loves China, is very fluent in Chinese. When he is back in the States between semesters, he lives in San Antonio, Texas. He's in San Antonio right now, skipped a semester to take care of some medical issues, which thankfully he came through great.

But it's funny to think of a brother in a place that is so foreign. No, not China. Texas. Yes, I know what you're saying, it's one of the 11 states I haven't been to yet, so I shouldn't judge a place by pre-conceived notions. Well, why can't I? And then last month the governor of Texas suggested that Texas should secede from the United States because it's so out of touch with what's happening in the rest of the country. I say, why the heck not?.. (although I say he should have to take all the states between him and South Carolina with him)... I really can't picture the rest of the country bothering to fight another Civil War to keep them in the Union.

So, if I don't go visit Davy sometime soon, I might be visiting him in a foreign country. Who knows which one?

And I need to get down to visit my sister Nancy in North Carolina sometime soon also. It's been a year already.

Next week, though, I'll get to see my brother Ronnie and sister Mary when Jerry and I vacation for a week in our family's home state of New Jersey, the only state that's totally in touch and of which nobody ever has pre-conceived notions.
Posted by Howard at 5:55 PM 1 comment:

It looks like Brett Favre isn't coming to the Vikings after all, or, who knows?, maybe he just wants a chance later on to get his name back in the headlines again, Will he un-retire or won't he? I know the guy is a dweeb, but I just want to see some spark in this franchise so that they don't move to Los Angeles in a couple years if they don't get their new stadium, and maybe he could be a one-year spark.

Switching from football to a sport that is actually in season -- baseball. The Minnesota Twins, the team that was almost dissolved several years ago by Major League Baseball because the state wouldn't build them a new stadium, moves into their brand new stadium next spring. The stadium is looking good, everybody is excited about finally having baseball outdoors again after twenty-some years inside the Metrodome, an awful venue for baseball but which somehow helped bring them two World Series Championships. And there is certainly something romantic about picturing those beautiful summer nights watching baseball outdoors. But remember what I was telling you about what a terrible April we had this year -- the wind and the rain and the cold? And do know how many snowstorms Minnesota has had during the month of October while some teams somewhere were off playing in the World Series? Let's hope for lots of rugged season-ticketholders. And players.
*****
On the home front: we've taken our house off the market for now and are going to try to stick it out. :-)
*****
My next blog will be sport-less and weather-less. I promise.
Posted by Howard at 1:31 PM 2 comments:

How about some football drama in the month of May? Well, in this case, it's just sort of a mini-drama for Minnesota Vikings fans as suddenly there is Brett Favre talk back in the air. Tonight, as I write this, Vikings coach Brad Childress is in Mississippi (Mississippi??) visiting Brett Favre, presumably to talk Favre into coming out of retirement AGAIN to come quarterback the Vikings to the Super Bowl (ha!).

Most Vikings fans here, of course, have been hating Brett Favre for about 18 years as he led the much-despised Green Bay Packers to a lot of success. So how to turn around and potentially have to cheer him on??..

I say, let's do it! The Vikings were so listless last year that they could hardly sell out their one local playoff game. Favre might at least bring out some fans to boo him. Let's fill those stands again, dudes. Come on, Brett... What's the worst that can happen to an old guy like you?.. -- a career-ending injury?? You won't be missing out on much more career! Would you rather be sitting on your front porch in Mississippi smoking a corn pipe?!

Who knows?.. Maybe we could learn to love the guy!
Posted by Howard at 6:38 PM No comments:

This was after Joan and Tom and I had been complaining in unison about what an awful April it had been because of the gloom and mostly too-cool temperatures and especially the wind. The wind blew like crazy (and is still blowing, even today) even on the relatively nice days!

(I realize there is nothing more pathetic and trite than a guy in Minnesota blogging about the weather, but bear with me....)

"And how can you hate wind, anyway? Think how awful it would be to have no breeze on those warm sunny days!" he says.

But I'm not anti-breeze! I'm anti-wind! -- the kind of wind that makes it hard for me to even walk one block to work or for Joan or Tom to stand out waiting for the bus -- day after day after day. It's not much consolation that it might be hot wind instead of wind-chill wind. Let's have some calm days! What if I wanted to golf (which, thank goodness, I don't!)?

... or how do I get into that windless bubble where Jerry apparently resides?
Posted by Howard at 5:40 PM No comments: