My son Jon and I are about to fly to Montreal.... Neither of us have been there before.  Renting an apartment there for a week, will get to know the city well!

"I love two things.  I love you, and I love the opera."  -- Ronny Cammareri (played by Nicholas Cage) in the movie Moonstruck.
*****
Personally, I love the Puccini and Verdi Italian operas.

Manon Lescaut, which premiered in Turin, Italy in 1893, is one I haven't seen before and am of course looking forward to it.

*****
My son Jon and I leave tomorrow for a week in Montreal and Quebec City.  Parlez-vous français, dudes?﻿
Posted by Howard at 12:30 PM No comments: 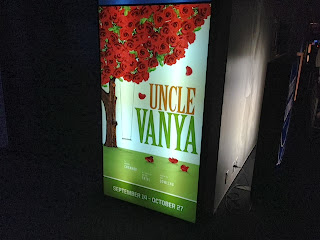 Thanks, Guthrie, for providing such quality and variety.
Posted by Howard at 3:31 PM No comments:

Michael, a friend (actually, more like a friend of a friend), and his wife were coming back from London the other day on a Delta flight, sitting in coach seats.  At some point, there was an "Is there a doctor on this flight?" announcement.  Michael's wife is a physician, so she responded.

There was a passenger in Business Class having a heart attack or something.  Michael's wife was gone from his seat for an hour and a half, trying to revive the man.  When she went back to her seat, she told Michael that the man didn't make it, he had died.

Shortly after that, a flight attendant came to them and said thanks for helping, we could move you up to Business Class if you like.  Michael:  "No thanks, there's a dead guy up there!"  So this is what the flight attendant offered them instead:  a $50 voucher on their next Delta flight!

What??  That's it??  Might it have been something bigger if the guy had lived??
Posted by Howard at 1:26 PM No comments:

what you didn't miss

"You wouldn't worry so much about what others think of you if you realized how seldom they do." -- Eleanor Roosevelt.
*****
A word of wisdom to the lapsed bloggers out there.  Who cares what your readers think when you probably don't have any anyway?  Write what you want, write it for yourself.  Experiment.  Go wild.  Take chances.  Or just post photos of your cocker spaniel.
*****
What you missed or, more likely, didn't miss since I woke up screaming:

--  Within the last month, I started to write emotional rants about the Syria thing, really angry stuff, but I found myself self-censoring because I apparently worried about how you, the unknown reader, would react.  You know I like Obama, for the most part, and you might get the wrong idea if I started comparing him to LBJ or george w. bush, two presidents who led us into destructive, unnecessary but corporate money-making wars based entirely on lies.  Plus I didn't know how sensitive you might be to over-use of the F word in describing my rage.  So I published nothing.  I need to take chances of offending you, the perhaps reader, sorry.
--  I started drinking Scotch, thanks in part to going on a binge watching 5 seasons of the amazing TV show Mad Men.  I'll have more to say about that (Both about Mad Men and Scotch).
--  To get a fresh start on working out, I dropped my membership at Lifetime Fitness and joined the YMCA.  For the past month and a half, I've been obsessed with getting back in shape, and I'm feeling great, and when I'm feeling good, my brain works better.... Let's see if it shows in my renewed blog ...