guess i couldn't do better after all

i'm not sitting at my computer typing this (at least not originally)... I'm 37,000 feet in the air over the Pacific, and maybe I'll type it into the computer later if it doesn't occur to me, Hey, I could have done better than that!

When we arrived at the airport at Honolulu, we were told that our flight had been cancelled. Of course, this is Northwest Airlines, so were we surprised? Of course not. We had tickets for a direct flight, Honolulu to Minneapolis, and now they were trying to find us tickets on other flights, other airlines maybe, changes in San Francisco, Chicago, wherever, getting us back home long after our scheduled arrival time. Then after all that, they decided that, No, our flight wasn't cancelled after all and we'd be departing on time.

We proceeded to our gate, where the computerized sign above the agent's desk said, "Minneapolis-St. Paul, departure time 6:20. DELAY." People were standing in line at the counter with questions like, "How long is the delay? Will I miss my connection in Minneapolis?" The airline agent finally showed up and said, "What delay? There's no delay." She looked up at the sign that read "DELAY" and said, "Okay, I'll have that changed," and she made a phone call, after which she announced over the PA system, "We can't remove the DELAY sign. The person who does that has gone home for the day." and they had to keep announcing that to all the other panicky passengers arriving at the gate.

Wow. What kind of job is that, typing "DELAY" into (or removing DELAY from) a computer program, maybe PowerPoint? A job that apparently is too hard for anybody else to do? Delays aren't allowed after 5 p.m.?

We finally were able to board the plane, and everything has been good for us since then. Jerry and I used frequent-flyer miles to upgrade to first-class and have been enjoying the service, the meal, the comfortable seats that even lie down, the little high-tech TVs. This is an eight-hour flight, and I kind of wish we could make it a little longer. When we arrive in Minneapolis, the temperatures (not counting wind-chill) will be seventy degrees colder than what we left behind in Honolulu. Ouch. Delay, please!
Posted by Howard at 5:41 PM No comments:

when we got to the top of Diamond Head this morning, after climbing all those trails and steps, I said, "wow, this is very cool. But I bet I'll never do this again." the views are magnificent, but once is probably enough. Once is probably not enough of Hawaii, though. We are getting closer than I would like to think to the time for leaving, and this has been one of our better vacations. We love our vacations in Europe, but this year the exchange rates for the dollar were a bit intimidating, and who can argue with Hawaii November temperatures? Lots to do, ways to relax, beautiful scenery, friendly people. The worst thing about this island, O'ahu, and this city, Honolulu, is the traffic. I'm not good at sitting in traffic that is at a standstill, especially when I'm not the driver.

we're staying in a great cottage in a very private setting in the Diamond Head area of Honolulu. It is the perfect setting for me to sit and read (if i feel like it), drink coffee, maybe go to the nearby beach. I managed to finally read David McCullough's John Adams, figuring it would take me a year to read it at home. It took me a week here. Jerry, meanwhile, is always driving around, learning the neighborhoods, ever being the real estate agent. He is ready to move here. Hmmm!
Posted by Howard at 7:07 PM No comments: 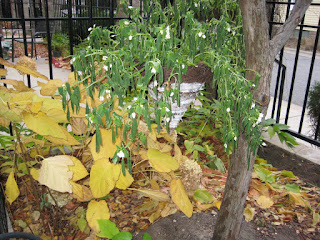 OK... so the temperatures finally went below zero, and the plants froze. so what.
-------
Jerry, meanwhile, is in Hawaii for a month, having a great time so far, trying to get his head back together (i didn't realize it wasn't together), and i'll join him there next week. We talk on the cell phones every day. It's weird not having him here. Quiet.
-------
You would hate it if i talked about sports again, so i will refrain from dwelling on how cool it was to be at the Vikings-Chargers game this past Sunday, when the Vikings kicked butt and Adrian Peterson rushed for 296 yards, breaking the NFL record. You shoulda been there.
-------
And, even though I'm a political person, I've been avoiding political talk, not because you couldn't handle it (Tom!), but because i'm disgusted with national politics at the moment and am on a sort of political sabbatical, ignoring it all for a while. My sister Joan was talking to me the other night about this same thing. She is a Hillary fanatic, not sure why, but she is ready to look away from it all for now -- the attacks, the games, the media, all of it so hard to take, and, like Joan says, "you just end up with your heart broken anyway." It's not easy for a person like Joan to ignore presidential politics. I wonder how many other people are spacing it all out. It's not a good long-term strategy for those of who really care what happens to this world -- we don't dare end up with another bush. I'm not sure what or who it will take to bring us back.
-------
I've been doing a lot of theater lately. You gotta have some entertainment of some kind, and there hasn't been , for instance, a movie in months that i've wanted to see, and TV of course is a wasteland. And the theater choices in Minneapolis and St. Paul are abundant. The Twin Cities metro area is second only to New York City in U.S. live-theater, you know. There is no way to see everything you might want to see. "Is the theater really dead?" i'd say no.
Posted by Howard at 7:24 PM No comments: