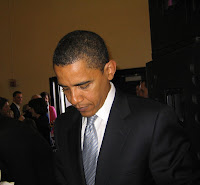 One of the best things about yesterday was that there was no more political advertising: No piles of junk political mail, no political phone calls, no political TV advertising. Suddenly, overnight, the country changes back to Dr. Jeykll from Mr. Hyde, and the desperate viciousness goes at least into hibernation.

I mean, when you think about it, isn't our political system a total embarrassment? After the past year of so-called debates, isn't it amazing that there still has been so little in-depth discussion of real issues? And who would put themselves and their family through the degradation that it takes to run for President these days?

The election, despite it all, ended somewhat happily from my perspective. At least something will change. When I saw Barack Obama and took this picture at a rally a couple years ago, I was concerned that his handshake wasn't firm enough, it was limp. After seeing the excellent campaign that he has run since his nomination in August, I'm thinking that maybe his handshake has gotten stronger by now. Or maybe he is saving his hands for more important things. I think he'll make a pretty good President -- and an inspiritional one for many. He might not be a JFK, but, let's face it, neither was JFK.
Posted by Howard at 1:00 PM