don't spit on my wedding cake

In recent days, Republican legislators in several states, desperate for ways to discriminate against the gay community now that same-sex marriage is legal in all 50 states, have come up with some really silly, far-fetched  proposals and laws based on some sort of cockeyed "religious liberty" (which in itself is a crock because they only want "liberty" for their own man-made religion).

In a future post, I'll rant about the goofy "transgender bathroom" panic, but for now let's chat for a minute about the urgency of their need to "protect" bakers and florists from being forced to provide services for same-sex weddings (There are straight florists?).

First, why would these fictional bakers and florists turn down the business?  Do they do a background search on all their prospective customers to make sure they don't disapprove of something about them?  Do they think they will go to hell for baking a cake?  Or are they just full of disgust and hate, which to me is a much better reason for ending up in hell?

And third, why the heck don't these state legislators have something better to do with their time and positions? 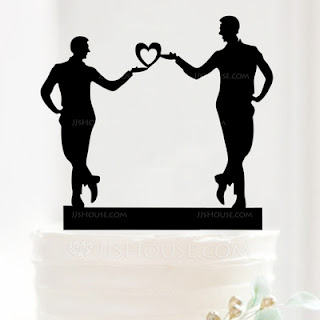