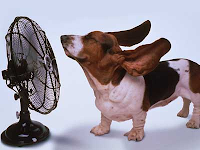 Here we are in the hot, humid "dog days" of August, so let's take a moment for some August trivia.

First, where did the term "dog days" come from?  Per Wikipedia:

The Romans referred to the dog days as diēs caniculārēs and associated the hot weather with the star Sirius. They considered Sirius to be the "Dog Star" because it is the brightest star in the constellation Canis Major (Large Dog). Sirius is also the brightest star in the night sky. The term "Dog Days" was used earlier by the Greeks (see, e.g., Aristotle's Physics, 199a2).

Dog Days were popularly believed to be an evil time "the Sea boiled, the Wine turned sour, Dogs grew mad, and all other creatures became languid; causing to man, among other diseases, burning fevers, hysterics, and phrensies." according to Brady’s Clavis Calendaria, 1813.

OK, maybe that was more than you needed to know about Dog Days.

August was named for Caesar Augustus, 8 B.C.  (Do you ever wonder about the "B.C." thing?  Is that what their Hallmark calendars said, counting down the years to zero?).

Fast forward to August 1969 A.D.:  Woodstock, 400,000 baby-boomers peacefully sitting in the mud listening to music in between the rain storms.  Oh here's some Woodstock trivia:  The Beatles were invited to play at Woodstock, but John Lennon said No, unless Yoko Ono's Plastic Ono Band could also appear.  I'm thinking this may have been a hollow response, since the Beatles hadn't performed in public since 1966.

August 2013:  the NSA, chaos in Egypt, political nonsense in the U.S. Congress.... The Sea boiled and Wine turned sour.  No days of Peace and Love, at least none that I noticed.