eventually the little guy made me nervous 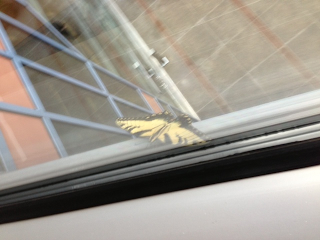 Mary O. pointed out to me that there was a butterfly on the outside of my office window, just hanging there.

At first, we said, "How beautiful!"  But he just stayed there and stayed there, even when I tapped on the glass.

I started thinking, maybe it's a sign to me from somebody or something, maybe something positive.  But after he clung there for several hours, I had a fear that the poor thing was going to die there, and what the heck kind of sign would that be to me??

He finally was gone, and I'm hoping he just stopped by to have a nap and then flew away refreshed.  If instead he gave up the ghost and crashed to the sidewalk below, I don't want to know.
Posted by Howard at 2:24 PM