how leon used to look 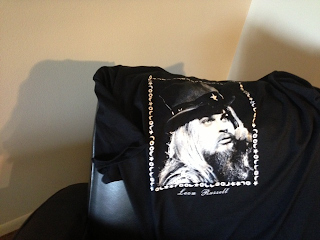 I first started loving Leon Russell during his time with Joe Cocker -- early '70s, the Mad Dogs and Englishmen Tour -- but he had been part of my life during the '60s too, I just didn't know it.  He composed or accompanied many of the '60s hits that I liked.

Until last night, I hadn't seen him perform in person in about 15 years.  His performance at the Dakota Jazz Club showed that he can still sound the same as he used to and play the piano like nobody else.  He's 71 now, is a bit limited physically, has had a Santa Claus-look for quite a while, but he's still cool and unique.

I even bought a Leon t-shirt -- why not? -- but the photo on it is Leon back in the early '70s, when a person might say he was in his prime.  But he is still performing 180 days out of the year, is still commanding audiences, so maybe his whole life is his prime.
Posted by Howard at 12:38 PM