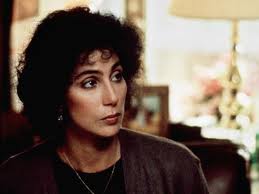 But it really is Cher's birthday, and the photo I posted is from the 1987 film, Moonstruck, because I didn't really want to post a Sonny-era pic or a photo of what she looks like now, which is plastic surgery to the extreme, and Moonstruck is my favorite movie and she won the Best Actress Oscar for her role.  Anyway, Cher, a one-of-a-kind icon of sorts for my generation, turns 67 today.  She has re-invented herself so many times in her singing/acting/celebrity career that you can't help but wonder if there are any more incarnations coming.  Or maybe not, dude.

It's also Joe Cocker's birthday, his 69th, and I bet he hasn't had any plastic surgery, and I bet his voice still sounds just as rough and powerful as it always did.  I hope.

My friend Kari has a birthday today too, now that I think of it, and she turns a much more reasonable age than the aforementioned duo, but I've never heard her sing.  Yet.
Posted by Howard at 10:20 PM