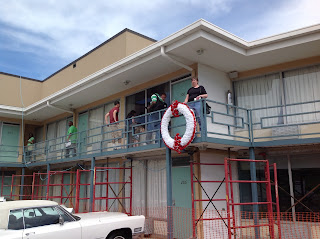 Even if you just went to Memphis for the food, you wouldn't be disappointed.  I have a major weakness for Southern comfort food, and, if I lived there, I'd weigh 300 pounds.

But Memphis is a city with interesting history and individuality, unlike many U.S. cities which are all too often depressingly similar.

And the history of Memphis has good stuff and some horrid stuff.

Remember -- my sister Joan, the history buff, was with us, so we stopped at the former Lorraine Motel, which has now become a tourist site because it is where Martin Luther King was shot and killed.  We peered into the motel room where he was staying and which has been preserved to be how it looked in April 1968.  It was kind of eerie to be on the balcony on the spot where he was standing when shot.

Across the street from the motel, in the building which used to be the boarding house where James Earl Ray was staying when he fired that deadly rifle, is the National Civil Rights Museum, which we toured.  The museum focuses on the history of the U.S. civil rights movement but also -- again, eerie -- has a restored mockup of what James Earl Ray's room looked like.  You can even stand at the window from which he took aim.  I don't know what I think about that.  This museum might be too much about the assassin.

Then we got back in the car and headed to something more musical.
Posted by Howard at 9:32 AM