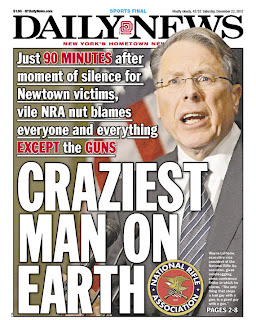 I got a kick out of the New York Daily News cover yesterday, referring to NRA bigwig Wayne LaPierre's press conference on Friday.

In my post on December 14 ("'unfathomable', he said"), the day of the Newtown massacre of children, I predicted that the craziest of the gun nuts would say the answer to the gun problem is more guns.  LaPierre proved my point.

While it is heartening to see people talking about finding a way to a sane gun policy -- at least a ban on military-style weapons in civilian hands -- we all know that the discussions won't get us far.  There are too many weapons already out there, and there are too many NRA members who have been convinced that restrictions on the deadliest killing machines will somehow lead to the government confiscating their hunting rifles.

Political decisions that could have prevented these mass murderers should have been made long ago and weren't, and now we are stuck with the consequences.
Posted by Howard at 12:56 PM