back before i avoided the name 'trump'

I get sentimental over weird things, but I'm really bummed about the financial downturn in Atlantic City, on the Jersey shore, just 30 miles west of my home town of Millville.

Atlantic City became a casino town in the late '70s, back when the only casino competition was several thousand miles away in Nevada, so Atlantic City had the whole East Coast to itself.  Now that there is so much gambling competition everywhere, the casinos in Atlantic City are dropping like flies.Out of twelve casino hotels, one has closed and three will close next month, including my former favorite, Trump Plaza. 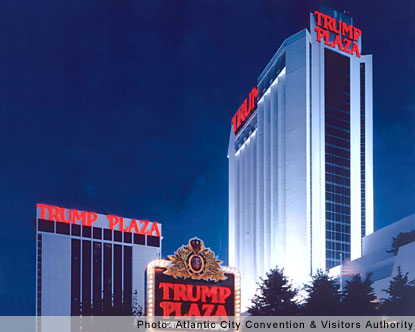 Back in the mid-'80s, Trump Plaza was new and already in its prime, and that was where I introduced my mom, a very religious lady, to slot machines.  Despite her initial nervousness ("What if I win a jackpot and my picture is in the paper?!"), she was hooked immediately, which scandalized my dad (who feared that she would spend her all social security check there) and my brother Ron, who was a pretty conservative pastor at the time and gambling, of course, was a "sin".  Every time I was back in New Jersey, I'd take her and my sister Joan down to Trump Plaza, where we played (only a little) and then would walk across the boardwalk to Ocean One for a cheesesteak.  We had such fun, I still value those days in my memories as some of my best ever.

The last time I ever talked to my mom on the phone, April 4, 1987, the first word out of her mouth was "Showboat!"  There was a new casino hotel named Showboat in Atlantic City, and she was going there on one of those day bus trips on the 14th and was very excited.  It was destined, though, not to happen.  She died suddenly five days later, on the 9th, age 66, and the 14th turned out to be the day of her funeral.

Trump Plaza and Showboat both are closing next month.  Sad.  I'm sorry to see them go. But for me, I guess they were never quite the same after April 1987 anyway.
Posted by Howard at 3:25 PM