they're on the north shore

Jerry's long-time friend Tomoko is visiting us from Seattle for a few days.  Tomoko has been going through some hard times physically, and she and Jerry wanted to spend a few days hanging out.  She's always fun to have around and do things with.  And she brought me two Verdi opera CDs, Otello and Macbeth -- much appreciated.  She and her husband Norm are opera enthusiasts -- they take tour groups to opera events around the country. 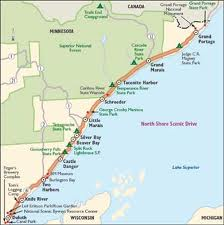 So Tomoko and Jerry have spent the past couple days in Northern Minnesota, along the North Shore of Lake Superior, which is two or three hours north of us.  Tomoko hadn't been anywhere in Minnesota outside the Twin Cities, and it sounds like they're having a great time.  Tonight they are in Grand Marais, one of my favorite Minnesota towns, right on the lake.  If you haven't been up that way, give it a try, it's beautiful.  And that's it for my promotion of Minnesota tourism!
Posted by Howard at 6:21 PM