a mirage in the desert 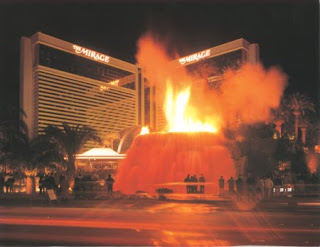 I admit that it's one of my guilty pleasures. The Mirage Hotel is twenty years old now, but it was the trendsetter for what came later to the Strip in Las Vegas. When I come here, it's still where I stay, even though it's aging a little and there are glitzier and more over-the-top hotel/casinos now. I know I'm kinda boring, but I like the familiar feel, one of those home-away-from-home places. Fortunately, it's also (like Vegas in general) a place where three days is more than enough.
**
But the best part of vacations for me is always the early mornings. I never waste a vacation sleeping in late. I still have time-zone confusion, but I was up early and headed downstairs to Starbucks (another guilty pleasure) for some coffee and to read the paper. It's a beautiful morning. We'll see what the day brings. So far, we've been lucky.
Posted by Howard at 10:42 AM