an excellent new play at the Guthrie 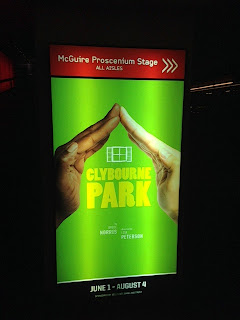 Clybourne Park, written by Bruce Norris, a play about race and racism, a sort of turnaround to the 1959 play Raisin in the Sun.

The play has great dialogue and characters and acting and is a good evening of theater.  All of the actors in Act One play totally different types of characters in Act Two, making for a wide acting range for each.

Clybourne Park won the Pulitzer in 2011.  This 2013 Guthrie production is outstanding..
Posted by Howard at 3:44 PM