solidarity of a dwindling minority 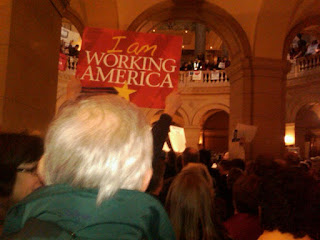 I'm obviously not a union member (although I was a Teamster for a summer long ago, if you can picture that), but I am a progressive and am a person who recognizes the value of the union movement and what unions have done for the working people of the U.S....
*
... so I joined a couple thousand mostly union members at a rally in the rotunda of the State Capitol Building in St. Paul yesterday to show solidarity with the protestors in Wisconsin, who are just about to lose their collective-bargaining rights.
*
The rotunda was packed and I was never able to get close enough to even see the speakers or even hear what was being said, but I was at least part of the cheering crowd. It was inspiring and hopeful. Stepping back from this rally, though, I was sad. Unions have been demonized these days by "conservative" politicians and the media, all of which is driven by the interests and money of Big Business (which has always of course been anti-union), and workers have become divided, union vs. non-union and even anti-union. Only 11% of the working population is union now, compared to 35% in the mid-50s. The voice of union workers has become diminished, and in this political climate this will only get worse. The middle class of the U.S. is disappearing fast.
Posted by Howard at 12:56 PM