reason to hate the saints 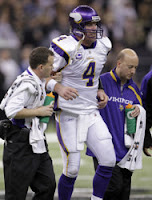 Well, finally... I, the casual football observer, have some validation.

It was that playoff game two years ago, the Vikings vs. the New Orleans Saints, that pushed me over the edge.  It was so obvious that the Saints had a game plan of seriously injuring Vikings quarterback Brett Favre.  Apparently they could not rely on their football skills to win.

Yesterday, the NFL formally charged the Saints with having unofficial "bounty" payments to some of their players if they were able to injure a key player enough to put him out of the game.  That 2010 Vikings game was specifically noted in the charges.  Let's hope the NFL throws the book at them -- suspensions, fines, loss of draft picks -- but unfortunately they can't take away that Super Bowl win that wouldn't have happened without their barbaric tactics.