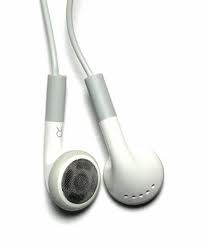 OK, I'm sort of getting used to people walking down the street wearing earbuds or headphones plugged into their iPods or whatever and maybe I don't think it's quite as purposely anti-social as I once did.  On the other hand, I know that people aren't generally so musically-inclined that they can't be ever be disconnected from their favorite tunes. It's not about the music.  Maybe at one time I thought it was just one of those annoying passing fads.  Now I realize that there are a couple of generations in which being only vaguely connected to real people they pass on the street is totally acceptable.

But then yesterday I was walking through the downtown skyway, where a good percentage of young hipsters are constantly plugged-in, and I passed a guy who had be at least 85, and he had the earbugs dangling from his head and he was bopping to who knows what kind of music on his electronic gadget as if none of the people passing him even existed.  That's when I gave up.  This stuff is here to stay, at least until the next thing is invented that makes each of us even more insulated.
Posted by Howard at 4:41 PM