maybe your family isn't as dysfunctional as you thought 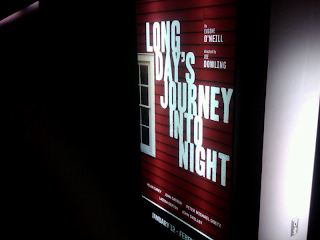 Ah, dysfunctional-family drama:  not a good thing to have in real life (although everybody these days seems to think they come from a dysfunctional family), but it makes for great theater.

James, my would-be-actor nephew, and I attended a 20th Century classic at the Guthrie Theater last night, Eugene O'Neill's Long Day's Journey Into Night, a play so autobiographical that O'Neill wouldn't allow it to be published or produced until well after his death (He died in 1953, the play was first staged in 1956).

The four main characters -- father, mother, two grown sons -- are juicy roles played convincingly on the Guthrie stage.  We have it all here -- dark family secrets and regrets, neurotic outbursts, drug addiction, alcoholism, and a riveting script.  The three-hour play takes place all in one day and is left basically unresolved at the end, giving the impression that it was just one tumultous day of many.

Highly recommended for the serious theater-goer.  Thanks again, Guthrie Theater.
Posted by Howard at 11:17 AM