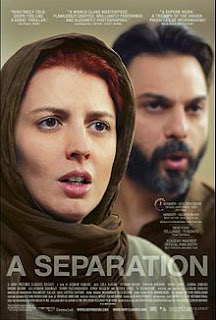 As you know, I'd already seen all the Best Picture Oscar nominees, so I picked a film that so many critics had picked for their 2011 Top Ten and yet wasn't nominated.  It should have been.  It is way better than the nominees.

A Separation is an Iranian film in Persian language with English subtitles.  It is nominated for a Best Foreign Language Film Oscar and also for Best Original Screenplay.  It could easily win both awards.

The story centers around two families in present-day Iran.  It sort of lightly touches on some current political and religious aspects of Iranian life, but mostly it's an engrossing story about universal family and relationship issues.  At a time when so many political leaders are calling for bombing the heck out of Iran, sort of an Iraq-revisited -- again the "weapons of mass destruction" excuse -- and generally making all Iranian people into something evil, it's good to see the other Iran produce the most human film of the year.
Posted by Howard at 2:08 PM

The Oscar nominees for Best Picture aren't really the best movies of the year?? There's a surprise!