Today I join The 700 Club.  Not -- God forbid! -- Pat Robertson's 700 Club.  This is my 700th blog post, and I would think that makes me part of just a very small group:  those who don't give up on their blog merely because they run out of ideas!  Heck, if I stopped blogging when I ran out of ideas, I wonder when that would have been??  :-) 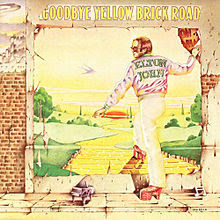 It's a work day Saturday, and, as I work, I am listening to the '70s station on Sirius Radio's website, at the moment re-broadcasting Casey Kasem's American Top 40 Countdown from February 9, 1974.  As I listen, I'm hearing some songs I never heard before (that never made it into the Top 30, probably)  and some songs that should have been forgotten... and some songs that are fun to hear again.  This was the era of Elton John in his prime, and I was at that moment fanatical over his album Goodbye Yellow Brick Road. A month later, my son Jon was born, and my priorities, well, made an adjustment.
*****
At the end of the Countdown:  #1 was "Love's Theme" by the Love Unlimited Orchestra; #2 was "The Way We Were" by Barbra Streisand.
Posted by Howard at 11:34 AM

Thanks for revealing my age to everyone!

I didn't even think of that, Jon! Now that the cat it out of the bag, I'm sure everyone is in total shock!