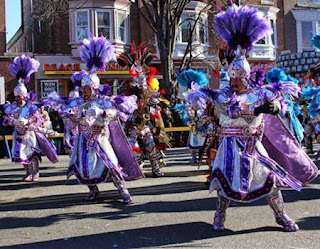 For a while this morning, I was live-streaming the Mummer's Parade in Philly.  The Mummer's Parade has been part of New Year's Day celebrations in Philadelphia for a couple centuries.  Mummers:  Wild costumes and music and a festive atmosphere in a parade that goes on and on.

As a kid, I once went to a Mummer's Parade that was ringing in one of those late-1950s new years.  A friend's dad invited me to go along with them.

What I remember the most about that day:  The Mummers were great -- very colorful and much more fun in person instead of on a black and white TV.  But it was very cold, and we had to keep ducking in buildings to get warm.

It was in those buildings that I was first exposed to the scent of booze.  I come from a family that had never had one drop of alcohol in the house, and in these buildings -- restaurants, stores, whatever -- everybody was drinking, and in one of them I remember seeing a woman, maybe in her 50s or 60s, just sitting there nursing her whiskey and staring absently in a hard sort of way, out the window at the Mummers out there in the street.  That image of her has always stuck with me.  I've always wondered what her story was.
Posted by Howard at 5:13 PM