the walls came tumbling down 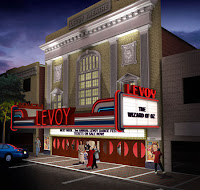 My poor hometown of Millville, New Jersey. The city has been going through rough economic times, coincidentally starting at about the time I left in 1976, due to a lack of planning on what would happen if the glass plants all closed (Which they did). Downtown Millville, like many downtowns across the U.S., mostly died, unable to compete with big-box stores outside of the downtown core.
*
Several years ago, a big push was made to turn downtown Millville into an arts center, which has gone fairly well, but the centerpiece of the newly fashioned downtown was to be the renovated Levoy Theater, a 102-year-old theater which hasn't been used in 30-some years. Local citizens formed a non-profit organization and set out to raise the money, and reconstruction started a few months ago.
*

I was surprised, though, when it turned out to be a re-building of the theater as opposed to a renovation. Only the outer walls were saved (the roof was already gone), and everything else was gutted. The dream, as imagined in the picture at the top of this post, ended yesterday, though, when the outer walls collapsed, and the building is now a rubble. Millvillians, past and present, are feeling very sad about this nasty and unexpected turn of events. There are a lot of memories from long ago lost in that pile of bricks.
Posted by Howard at 2:01 PM