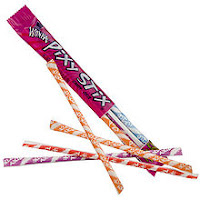 Card games last night -- Hand and Foot (a Canasta variation), four teams of two, and somehow Jerry and I won the first game, even though our arch-rivals Tom and Ruthie were one of the other teams (They squeaked by to win the second game).

We ordered pizza, and everybody brought snacks and wine and Pepsi, and it was a nice relaxing but competitive evening that went late.  I was sipping Pepsi all evening (wasn't in a wine mood), already getting a sugar overload, and Mark, one of the other players, offered me some Pixy Stix, which I had never heard of and of course everybody yelled at me for not knowing what Pixy Stix are.  They are these straw-like things with colored sugar in them.  I tried one, and then everybody yelled at me for not knowing how to eat them.  You open one end and pour the sugar into your mouth, and it took me a while to figure that out and everybody thought I was a moron.  This is a tough crowd.

It would be interesting to see if any of your siblings know what they are. Maybe it was a family 'non-exposure" thing. I'm surprised Ruthie knew them since I didn't know they still existed. I remember them from my childhood days.
Vickie

Of course I know what they are!!! I also knew not to wet the end or you'll have trouble getting anything because you close it up. Until that night, I didn't know anyone didn't know what they were. I thought it was like Pepsi or Coke kind of knowledge. :-)

well, i have to say, I wasn't missing anything -- they're awful.

maybe i was too busy eating Tastykakes as a kid.

Like I said before, I only like 2 flavors and I won't touch the rest. I would rather have Tastykakes any day. I'm still more shocked though that no one knew what Ides of March was than someone not knowing this.