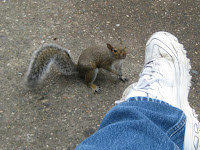 One of my sister Joan's favorite pasttimes is sitting in Rice Park in downtown St. Paul with her Starbucks coffee and the panhandlers and the squirrels.  As many times as she has been there in that park, I don't think she has grown very fond of the panhandlers, but she has taken to feeding the squirrels (also known as "tree rats").  They come up to her now and seem to know her and I think that maybe she has names for some of them, and so far none of them have been rabid.  Joan has evidently never had squirrels destroy a garden or any part of a house or garage or shed, so she still thinks of squirrels as "cute", and that's kind of sweet of her.

So she shows her kindness to these "adorable" and "misunderstood" creatures (While the panhandler at the other end of her park bench looks on jealously).  She kind of reminds me of the Bird Woman in the movie Mary Poppins, whose heart is in the right place but obviously never had birds poop on her car.  Watch the video and check out the Bird Woman, who appears to be a sweet lady but just a tad, um, squirrelly.

I kind of understand, I guess. I know what a nuisance pigeons are, but I fed them when I was in Amsterdam and Paris. (For some reason, I never do that here though.) And even though I don't like squirrels, rabbits are still worse.

Hey, remember the time we saved a frozen squirrel? I bet Squirrel Woman's never done that! At least not yet.

Jon -- I don't remember the frozen squirrel! -- Help me remember!

Worthington... a blizzard... a frozen squirrel on a tree branch... we put him in a box and let him thaw out overnight in our basement... the next morning he tried to attack us! Ringing a bell?

Yes, that rings some sort of bell.. I think I've tried to mentally block out those Worthington blizzards.

aw, you guys have a soft spot for squirrels,too