his mouth, her leg

It was so tempting to rant about Mitt Romney again and his unbelievably offensive reaction to the embassy killings in Libya (I mean, whatever happened to the "United We Stand" mantra that those people used to spout?), but I will refrain from the obvious and instead post something more unusual.  You know that I am not pro-tattoo -- in fact, I would say that I am anti-tattoo, so it's remarkable that I am talking about tattoos twice in the same week, but I found this photo of a lady's 3D leg tattoo fascinating (I admit that I stole the pic from a friend's blog, and she had stolen it from somewhere else)... 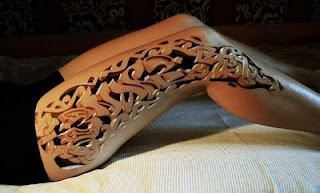 I, of course, being a bit of a curmudgeon about such things, can't help but wonder what this leg will look like when varicose veins set in, but you have to admit that it's an eye-catcher, while being sort of spooky-looking at the same time.
Posted by Howard at 7:21 PM

I think you won't see varicose veins that much.(At least not in his particular area of a woman's leg) It's cellulite that's so unfriendly with tattoes. But you are right: It's an eye-catcher. There are just so few occasions for this kind of allure, maybe this was made for a swimmer? ;-) But maybe it's just a plastic leg and all my assumptions are für'n Arsch.