they're sorry they're late 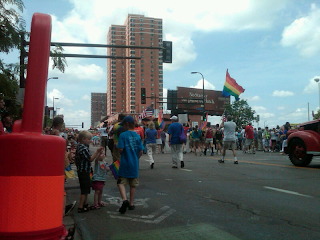 This has been Twin Cities Gay Pride Weekend, and today was the day of the Pride Parade.  It was fun as usual, about 150,000 people attending and/or marching, including our Governor (Dayton) and our two U.S. Senators (Klobuchar and Franken), and is a two-hour parade of various groups, organizations, music, churches, corporations and lots of miscellaneous.

Every year it's about the same, except that each year it gets bigger, and for me a highlight this time was a group of marchers under a banner of "Mormons for Equality", or something like that.  There are Mormons that are fighting the teaching of their very politically-conservative church!  I had read an article about that recently too, that some enlightened Mormons are risking excommunication by speaking out for equal rights.  I find this very encouraging, like some sort of turning point, that good people will in the long run select love over hate.  Several of the Mormon marchers were carrying signs saying "Sorry we're late!"  They may be late, but they are sooner than expected.
Posted by Howard at 6:54 PM

Mormons for Equality! What's next, vegetarians that eat meat?