the story of ten years ago today 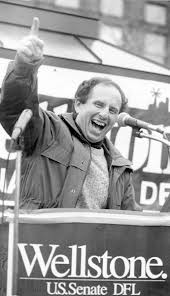 Jerry and I were driving to have lunch when we heard on the car radio that a small plane carrying Senator Paul Wellstone and others had crashed in northern Minnesota.  We freaked out.  We immediately skipped any ideas of lunch and headed right for Wellstone re-election headquarters, a place we knew well.  As we drove, we heard the further news:  that Paul, his wife Sheila, daughter Marcia and several unnamed others were confirmed dead.  Besides wanting to be with like-minded people in those terrible minutes, we needed to make sure our friend Fawn and other Wellstone staff members that we knew were safe.

I'll never forget the scene at the Wellstone office that day.  Everyone was panicked and crying, grief counselors were already available, CNN and the other news networks were setting up outside and broadcasting nonstop about this national story, the death of a U.S. Senator.  We stayed well into the evening in this surreal place.  I remember that Senator Ted Kennedy happened to be in town that day and stopped in at some point to try to comfort all of us.  As he shook my hand, I looked into his eyes and saw his own grief, an emotion that he knew well from his own life, but I couldn't speak.

Paul Wellstone was the voice of my political conscience, but for me personally there was more to him and his family than that.  They were always happy to see Jerry and me at various events, and they would find little human memories that would give us all laughs:  the time when Paul, at a fundraiser at our home, realized to his horror that his zipper was down ("That's the first time that ever happened to me!" he told me later); the time Jerry crashed a wedding party being held in the same building as a Wellstone fundraiser just to get Sheila a glass of red wine; Marcia telling us that our "drama-red" living room walls had inspired her to paint one of the rooms of her house the same color (and, as she would tell us this, her husband would roll his eyes).

My political world has been empty without Paul Wellstone, but what still brings tears to my eyes is the memory of how wonderful these people were.  I considered them to be friends, but, in reality, they were friends to all five million residents of the state of Minnesota.
Posted by Howard at 10:57 AM

I still remeber when you took me to that morning breakfast thing in st paul when he was speaking there. I just remeber being so glad I went with you guys that day.