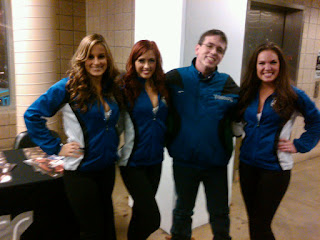 The blog post that over my blogging years has gotten the most hits -- by far! -- is my February 13, 2011 post "good mood food".  It's mostly because lots of people over the past year have Googled that Arby's tag line, which was just about to premiere back then, but it might also be because there was a cool photo of my son Tom with three of the Minnesota Timberwolves Dance Team members.

Deja vu -- see the pic above!  Last night Tom and I went to the Wolves basketball game vs. the San Antonio Spurs, and he had a chance to have his picture taken again with Dance Team members.  His big smile with these nice ladies plus the Wolves winning the game put us both in a good mood -- even without Arby's mozzarella sticks!
Posted by Howard at 12:09 PM