a last-minute soft spot for the hard rock 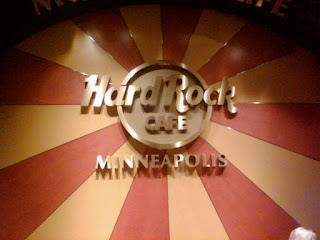 The Minneapolis Hard Rock Cafe is closing tonight -- slow business, wrong location, who knows why? -- so James and I had fun having dinner there last night, sort of a nostalgia goodbye even though I had only been there two or three times before.  It's too bad.  World-class cities are supposed to have a Hard Rock Cafe where people can find souvenir t-shirts and shot glasses, are they not?

I guess a Hard Rock is a place you go when you're traveling, it's not a place you go when you're a local.  We've been to Hard Rock Cafes in, for instance, Paris, Tokyo, Amsterdam, Copenhagen and London, and maybe Minneapolis just doesn't have enough tourists who could find this restaurant. Plus, I realize that Hard Rock Cafe t-shirts are not the big deal they were in the early 90s, that's probably part of it too.  Things change...

... all of which is way more than I intended to say about the Hard Rock Cafe.  It's a big corporation that won't miss its Minneapolis location. But how sad these employees were!  Our waiter talked about what a great place it had been to work, how much fun it had been. In the gift shop, everything was 75% off, and people were grabbing what they could to buy, and the cashiers were sad too.  It's not easy finding a job that you like -- or, these days, any job -- and now these people need to start over somewhere else.  There's a lot of that going around.
Posted by Howard at 4:36 PM

and to think I never got a shot glass from there....never even been there or even know where it is

I went there once. It was before I moved to MN. I think Ronnie and I were there on vacation one year many years ago. I bought Teresa a shot glass. She collects them.
Vickie

Mpls is a world-class city? Good one.